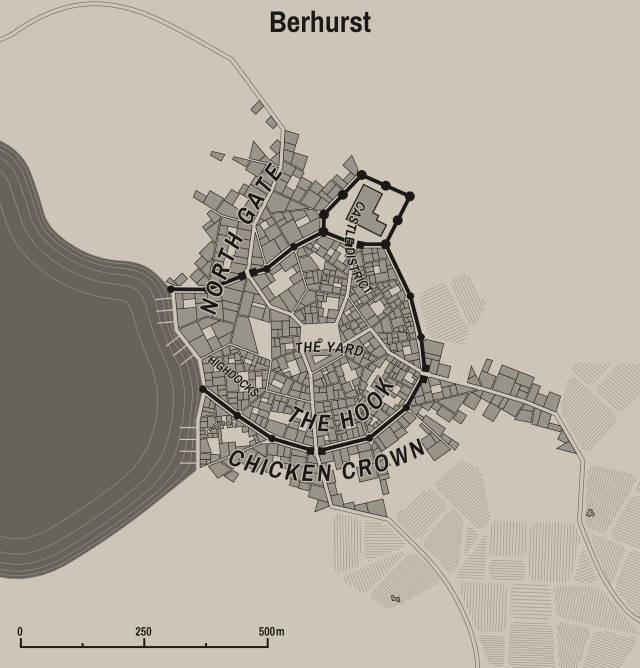 Berhurst is in the northern part of the Empire along the Emporer’s Way. It sits on the shores of one of the largest and deepest lakes in the Empire, Lake Bodenska.

The city is separated into several districts.

This district surrounds the northern gate into the city. It effectively serves as the merchant area where shops of various goods and sundry can be found along with the homes of the average merchants in the city.

This district serves as the well to do area of the town. The better off merchants and city officials all live within this district.

Built around the time of the cataclysm it’s newer than some of the fortifications in the Empire. It’s currently the seat of regional authority in the northern part of the Empire. The city council, head of the local Watch, and the Zarazen Captain all have offices in the castle.

The Honey Pot House of Cortege

The yard is a green space in the middle of Berhust that its citizenry can use. Restaurants and pubs line the square. The local watch garrison performs maneuvers here as well.

The White Bow Tavern and Inn

On the south side of the yard is the watch garrison.

Against the wall it’s where the lower class human citizens of the city live. It’s not an ideal place, but the buildings are solidly built and at least they’re inside the wall. Watchmen with families also have their homes here clustered near the barracks on the southern end of The Yard.

The higher end docks for the human populace. The majority of the buildings in this area hold local food stuffs, fish mongers, etc. There’s rides and games for children and a few specialty shops for those traveling through the city. [Consider like Seattle’s Pier]

This is the low end docks and warehouse district. Many of the locals from the Chicken Crown fish here for the food they need.

The majority of the dwarves and halflings live outside the walls in the Chicken Crown. Most of the buildings in this area of the city are run down lean tos. It gets its name from the livestock that’s kept in the area and the smell that eminates from close proximity. It’s a sarcastic moniker.

A local tribe of Sahuagin are kidnapping people. The fish in the lake are diminishing and they need a food source. They’ve turned to the local populace for sustenance.

Undead at the Festival!

Their main attraction is a beautiful singing woman who can hypnotize with her song. She has a companion tiger that she performs on to proove her abilities before calling on the crowd.. During a performance that the players attend, after she calls forth her volunteers and while singing to them they turn into undead. Their skin tightens as spikes erupt from their skin and they set upon the crowd.

This begins a lockdown of the carnival and questioning of the personnel. Could be used as a way into the jail system to rescue Quelanna.

Upon opening the carnival and the Midsummer Festival, there is an assassination attempt on Severen.

For much of the same reason that the fish are not spawning in the lake, the crops in the area are yielding less and less. Shelly’s farm seems to be the hardest hit. All signs point to the soil becoming infertile. Nobody has seen the Shelly family for a few weeks, have they moved on or something else?

Qualanna is being held in the castle’s sub basement. Entrance and exit from the castle grounds is heavily guarded at all times. The floor she’s being kept on is warded against magic. A device on the floor emits an antimagic aura so that anything magical loses its properties while on the floor.

If resque is attempted and even more doubtful successful, Quelanna will not leave without the magical crystal recovered from the kobolds. She will sacrifice herself to regain it and make sure it makes it back to the Elven Conclave.

Ascendant campaigns can view previous versions of their pages, see what has changed (and who did it), and even restore old versions. It's like having a rewind button for your campaign.

We've already been saving your edits, so if you upgrade now you will have instant access to your previous versions. Plus, you get a 15-day free trial, so there's nothing to lose.

I'm sorry, but we no longer support this web browser. Please upgrade your browser or install Chrome or Firefox to enjoy the full functionality of this site.