Based on: Undersea Temple

People are being kidnapped from Berhurst and nobody knows why. It’s been going on for some time, but nobody really cared enough because the people that have gone missing have been mostly halflings and dwarves. A few of the old fishermen have gone missing, but there’s really not much to be said there. Lake fishermen come and go and are known to get paid and then disappear in a drunken stupor for a few days/weeks. The Guard has been called in after a few human children have gone missing in recent days.

Gimgen Balderk
Dwarf, 21, 2’3", dark black shoulder length hair. Already showing stubble. Father’s proud of him and is frantic about finding him, but stoic.

Vistra Durthane
Female Dwarf, 25, Tall at 2’7", she was wearing a simple grey cotton dress when she went missing.

Fulbar Tosscobble
Male Halfling, 15, 2’. Brown curly hair and a bit to thin for his parents. They do the best they can.

There’s a local population of Sahuagin that have been forced to kidnap children in order to survive. The fish in the lake are showing up with deformities or are found alive, but withered, gaunt, and without meat.

Tavern Rumor PCs could overhear rumors about the mysterious disappearances around the town, but only about the children that were taken.
Tavern Rumor The price of fish. Local fishermen are saying that more and more fish from their catch are coming up either strangely gaunt and without meat, their scales flaking off or with weird bone protrusions from their flesh.

If the PCs search the docs at dusk or after there’s a change that a Sahuagin raiding party will attack them. 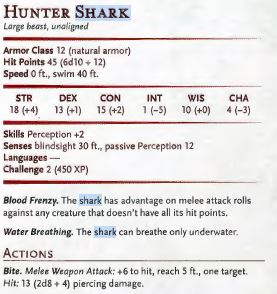 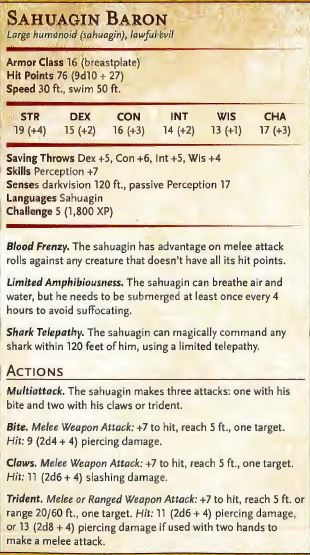 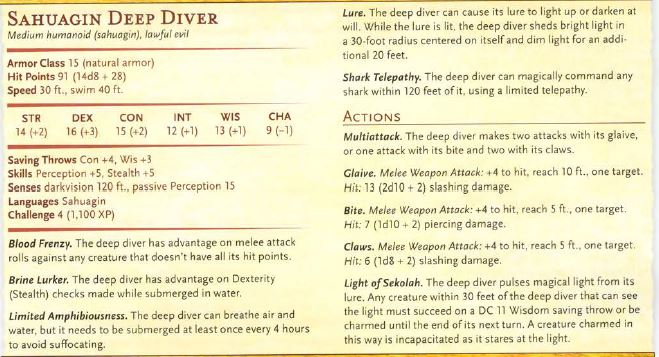 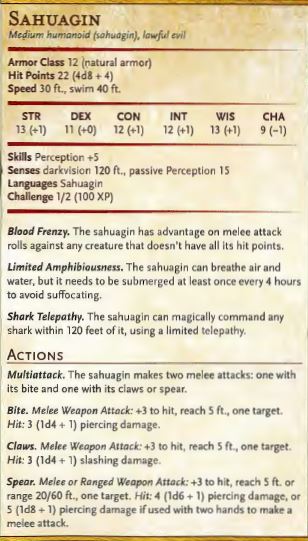 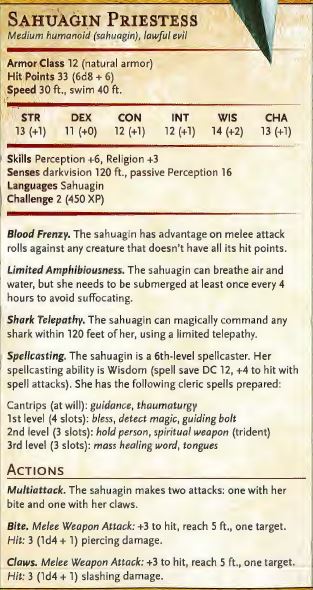 The base of the sahuagin is a temple carved from stone deep in Lake Bodenska. The party will require water breathing to venture there. 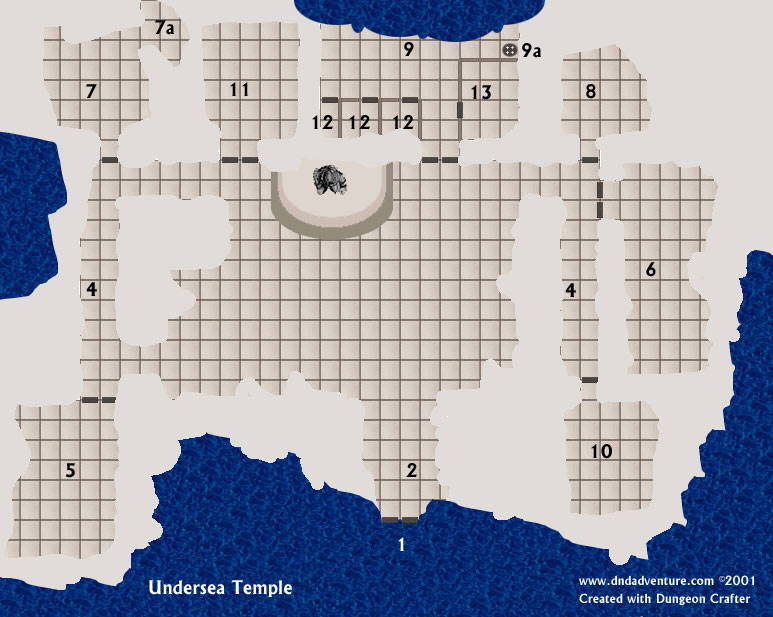 The temple lies about 100’ below the waters surface near the center of the lake. The walls are carved stone from the bedrock and all areas are complete darkness. The Sah don’t need light sources to live.

The area outside the the temple is patrolled by a Hunter Shark, Sahuagin Deep Diver, and 2 Sahuagin

The entrance to the temple is a 15’ high cave opening. A heavy curtain of kelp obscures any vision beyond the entrance.

The kelp is Strangle Kelp a DC 20 Perception check will reveal it as such. Anyone trained in survival can use that check to spot it instead. A ranger/druid attuned to the sea will recognize it immediately.

The kelp will attack with fronds that extend up to 20 feet from it’s central mass. Each strangle kelp has 3-12 fronds.

Behind the strangle kelp stand four guards, 4 Sahuagin. If anyone is caught in the kelp, 3 rush to attack while 1 runs to the High Priestess and Baron to warn the Temple.

A large 10’ tall statue of a shark head on a humanoid body dominates the temple area. It sits behind a stone altar on a raised dias opposite the main entrance. The head of the statue seems to be made of gold while the body is a grey marble.

This is the main worship area of the temple, it is dominated by a large stone altar and a very large golden statue of the shark god that the sahuagin worship. The golden statue is protected from erosion and damage by spells of preservation. It weighs 500 lb. and would fetch 10,000 gp. if a buyer could be found, a king or rich adventurers perhaps.

This room is the commander of the Sahuagin’s. It contains a larger than usual sized stone bed covered in kelp and moss. There is a stone desk and chair and the ceiling is covered in a mural depicting a great battle of the sahuagin people vs. elves, dwarves, and men. The center of the domed ceiling depicts a large whirlpool with a shark man emerging.

Beds of kelp line these rooms. Stone chairs and tables are hap hazardly strewn around the room. Discarded fish skeletons float around the water.

A search reveals a medium sized pearl (100g) among the different refuse.

1d8 Sahuagin are in this room at any time.

This looks similar to the barracks of room 5. Several kelp beds are set up around the walls, but fewer. Each bed has a metal foot locker at the head.

A search reveals a stone idol of a squid like being made of green stone. (Jade, 100g)

This room contains the weapons that the captain keeps under lock.

This room contains many hundreds of fist sized translucent eggs. In the room are 2 Sahuagin Priestess tending to the eggs and a Hatchling Swarm.

The sharks the Sah use to hunt with are here. This is a large open cave area behind a metal portcullis. Several hunter sharks can be seen simming around behind the portcullis.

The room is dedicated to four priests that help with the ceremonies in the temple. They deserve individual quarters but the high priestess uses them against each other to keep her position secure. There are 1d4/2 priestesses here resting.

Treasure: Under the bedding is a magical disk emblazoned with runes. The disk acts like a scroll and contains the Charm Monster spell.

They are more sumptuous then any of the other quarters. The room is dominated by a large bed made of stone but covered in seaweed and kelp. The room also contains and actual table and chairs also made of stone. Near the bed is a small personal shrine for her use alone.

Treasure: in a container that appears to be a clam but is actually made of coral- inside are 4 small pearls (value 50 gp. each), a large copper bracelet that is beginning to turn green due to exposure (value 80 gp.), and a stone vial with a wax seal. This contains some kind of herb that is being kept dry in the vial. This radiates magic and duplicates the effects of a philter of love if eaten. The priestess intends to seduce the captain to increase her personal power and chance for more powerful offspring.

This is where all the prisoners are kept. In each cell is a magical sphere of air to keep any air breathing prisoners alive. Currently there are half a dozen children in the cells. 3 human boys, a dwarven girl, and a halfling boy and girl.

It may be difficult to get them to safety without some form of magical assistance.

This room should be entitled junk room, it contains all the things the sahaugin have no immediate use for. Items taken from captured prisoners will end up here, anything scavenged from a ship wreck may also end up here, even a few fish bones are here. With at least 2 turns of searching the players may discover The Mask of Conjuration it was in the belongings of the previous high priestess and the new one saw no value in it so it was placed here.

Treasure: Mask of Conjuration Requires Attunement, when a conjuration spell is cast by a caster wearing this mask the maximum number of creatures are summoning.

Ascendant campaigns can view previous versions of their pages, see what has changed (and who did it), and even restore old versions. It's like having a rewind button for your campaign.

We've already been saving your edits, so if you upgrade now you will have instant access to your previous versions. Plus, you get a 15-day free trial, so there's nothing to lose.

I'm sorry, but we no longer support this web browser. Please upgrade your browser or install Chrome or Firefox to enjoy the full functionality of this site.